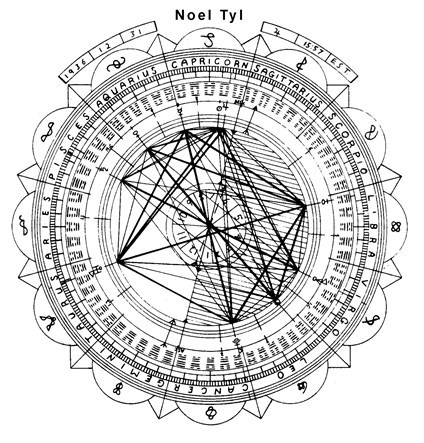 ASTRO-LOGIC, A SYNTHESIS OF I CHING AND ASTROLOGY

It is probably best to work on one’s own chart. However, Noel Tyl, has kindly given me permission to use his chart as an example.

The chart form that I use incorporates the symbols of the I Ching. The hexagrams are placed within their specific signs and in their correct sequence. There are five hexagrams in each of the Cardinal and Mutable signs and six in each of the Fixed signs. The symbols used for the signs of the Zodiac may at first seem strange to you. They have been developed to clarify the distinction between the Sidereal Zodiac (constellations) and the Tropical Zodiac (signs). I use the traditional Zodiacal symbols when referring to the constellations. I use the new symbols for the Tropical Zodiac which refers to the seasons of the year.

The two sets of symbols are not entirely unlike each other. The new symbols all incorporate a type of spiral or wave motion, and Libra is as the atomic balance. The traditional symbols are like letters, they are similar to the constellation in that they appear to be fixed. In my more advanced astronomical work, it became increasingly important to make some distinction between the two systems. In this chart form the names of the signs accompany the symbols. The Zodiac is kept in fixed position on the page and the houses take their appropriate place. The Ascendant is only on the extreme left if it is in Aries.

Astrology – I Ching of Noel Tyl

Noel has his Sun conjunct Jupiter in Capricorn in the Seventh House. His life’s purpose will shine through successful administration of marriage, partnerships and public relationships.

It is next to impossible to do justice to the depth and profundity of this system in such a short article. Only Noel, if he reads any of his hexagrams, will be able to verify the true depth that is inherent in this system of change. Only Noel will know if the Arcane symbolism of his chart is valid. And to be sure of it he will have to explore, and this-is the lure and reward of Astro-logic to any individual.