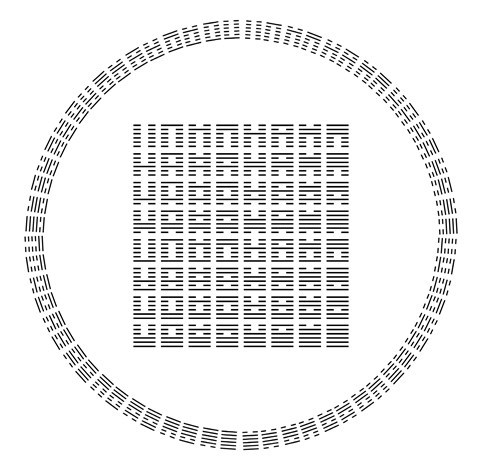 ASTRO-LOGIC, A SYNTHESIS OF I CHING AND ASTROLOGY

A Cosmic Set of Degree Symbols

The I Ching, or Book of Changes, is known both as an oracle and as a book of wisdom. This is not a paradox. Divination is simply one effective way to become oriented into the wisdom and symbolism of the I Ching. Two major world religions have evolved from the study of the changes. They are Confucianism and Taoism. Both of which are exceedingly subtle and profound. The one general theme of the I Ching is that the only thing that we can be sure of is change. Everything changes. Life is a constant state of change. Nothing remains the same.

How can we adjust to Life’s ever-changing demands? How can we see order in chaos? How can we understand what is happening to us? How do we get the right perspective on life? It is in answer to this need that people turn to divination of one form or another. Divination is a way of tapping the ageless wisdom in such a way as to make it significant in one’s own life.

There is one major problem with the divinatory arts. Let us take the I Ching as an example. It gives the most remarkable results when consulted. The words are round-about but they hit the mark. This is wonderful for solving problems or making decisions and it also teaches us more and more about the wisdom of the changes. However, there is a tendency simply to accept what comes; to use the I Ching instead of thinking.

Many people have been throwing the I Ching for years and have not yet encountered all the hexagrams. Divination is an orientation into the I Ching, but it becomes a limitation (at another level) when one wants to understand the changes. The problem is that we never run across all the hexagrams often enough. If all 64 hexagrams were contained in the Zodiac or vice versa, then we could study the system with a much more wholesome familiarity. Instead of divining hexagrams, each of us would have all 64 hexagrams in our natal charts, and certain hexagrams would be accented more than others when planets were in them. Certain signs would contain certain hexagrams. We would have different hexagrams in each house of our natal chart.

We know that both Astrology and the I Ching measure cycles. The Zodiac measures, in 12 phases, the changing ratio of day to night throughout the year. The I Ching measures the same ratio in 64 phases. However, when we try to correlate the two systems, we run into a problem. There are 384 lines in the I Ching and 360 degrees in the Zodiac. If we could fit them together, we would have the most amazingly profound set of symbols for the degrees of the Zodiac. The wisdom of the ancients stored in the language of the I Ching, could then be studied from an astrological viewpoint. The beauty of using the I Ching hexagrams as astrological degree symbols is that there is a profound and logical basis for understanding its meaning.

Every hexagram is a relationship between two family members, with 8 hexagrams being the relation of each member to himself or herself. Each hexagram is also a different nature image or weather forecast, as well as a particular type of experience (quality comparison) or mode of action. By memorizing 8 symbols, we can figure out the meaning of any hexagram. By remembering the sequence of the hexagrams through the Zodiac a remarkably simple yet profound set of Zodiacal symbols becomes accessible. For example, the hexagram, Deliverance , stands for the relationship of the second son to his older brother, the nature of which is like a thunderstorm. Its type of action is “arousing out of the abyss”. The name of the hexagram is ‘Deliverance’ . It is the first hexagram in Virgo, the sign of work (abysmal labour) and self-criticism. “Arousing out of the danger of Leonine delusions of grandeur, by becoming an abysmal self-critic. The danger is too much criticism or discipline. The deliverance comes from starting to work.”

These symbols express significant depth. Based on the balance between the light and the dark throughout the year, they are in fact a more complex and accurate Zodiac than the division of 12 signs. Every hexagram covers 6 degrees of the Zodiac except for 8 which only cover 3 degrees. Each line of a hexagram relates to one degree of the Zodiac. The meaning of any specific line is very complex as it always maintains the theme of the hexagram it is in. However, for detailed work each line (or degree) also has a hexagram symbol for it. The exact correspondences, you will find in volume elsewhere on this site, and in Astro-Logic, Part 1: The Degrees.

There are already many sets of degree symbols in astrology, all of which have been to some extent, obtained clairvoyantly. The difficulty with this procedure is that it is impossible to get symbols that are not coloured by the values of the seer. The most respected and well used degree symbols are the Sabian Symbols explained by Marc Edmund Jones and also by Dane Rudhyar. These symbols have a great amount of depth and are exceptionally valid for North American White Anglo-Saxon Protestants, but cannot be taken in the same light by humans of different racial-cultural upbringing. Quotations such as: “A Chinese laundry”, “Bathing beauties”, and “A Bolshevik propagandist” are certainly coloured by the upbringing that one has. They would mean totally different things to different individuals. These symbols represent an antiquated value structure. The racist and sexist connotations would certainly be unacceptable to the majority of the world population.

When we look into the I Ching symbols we find a neutral profundity valid to all life. The six solid lines represent the greatest brightness of a cycle, which in a year, would be the longest day at the summer solstice. It also signifies the greatest individuality of the cycle, a time when the group emphasis is at its minimum. The six broken lines, in contrast would represent the greatest darkness, the longest night, the winter solstice, and the extreme of collective living when the emphasis on the individual is at its minimum. The remaining 62 hexagrams represent the various phases between these two extremes. These symbols, like the Zodiac, present a common denominator to the various divisions of Humanity. They are truths that all men and all women, of all nations, and all religions, can and do experience. The I Ching and astrology are cosmic languages which contain the Wisdom of Ages. They are true for all humans and therefore they further the true Aquarian spirit of peace and good will on Earth.

Consequently, we can use our astrological birth chart as our individual life orientation into the mysteries of change. The hexagrams that are most significantly accented in a birth chart are the hexagrams of the 4 angles ( Ascendant, Descendant, M.C., & I.C.), the Sun, the Moon, and any multiple conjunction of planets and angles. When reading a significant hexagram, we can interpret it according to the nature of the planet (s), or angles in it. Furthermore, we should consider the hexagram line that a planet is in as a changing line which will produce a second hexagram (after-thought hexagram). A changing line is a line that changes into its opposite – from a solid into a broken line, or from a broken into a solid line. All the other lines stay the same, and an after-thought hexagram is formed. This after-thought hexagram reveals a certain potential that has a tendency to evolve from the main hexagram. For greater depth and subtlety, we can study the single-line-hexagram for the planetary degree. This, however, is beyond the scope of the article.

Here is a suggested approach. We can focus upon the meaning of a planet (Sun, Moon, or Ascendant to start with) then look at the sign that it is in, then look at the house that it is in. Once this information is assimilated, we can interpret all of the aspects this planet makes to other planets. One at a time we can assimilate the meaning of each aspect relationship. Once this is absorbed, we ponder again on the planetary focus and its attitude (sign) and circumstance (house). Then we look up the related hexagram and read it along with only the line or lines that the planet or planets are in.

You will find that the theme of the hexagram will have been predominant in your life with varying intensities at different times. Nonetheless the theme will be there. Especially when one looks up one’s Ascendant. The new hexagram formed by the changing line will add an after-thought. Many times, I have spent four or five consecutive hours on a one-degree line in my chart, simply exploring it.

This is an extremely personal subjective process and one gets as much as one puts into it. One can go as deep as one is able, but no further.